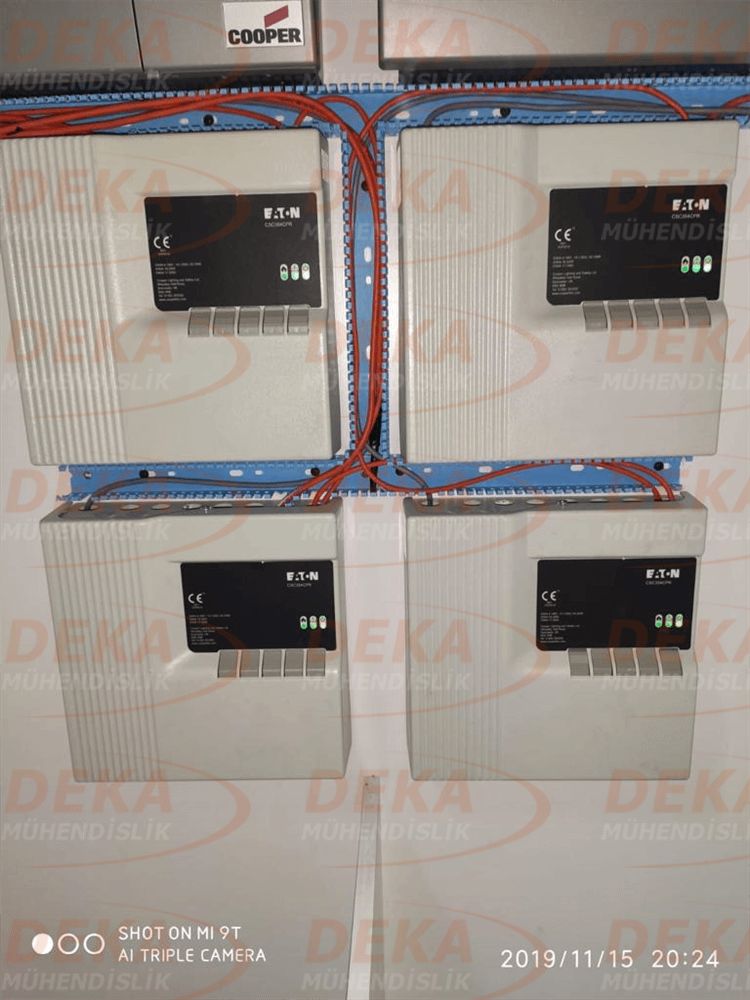 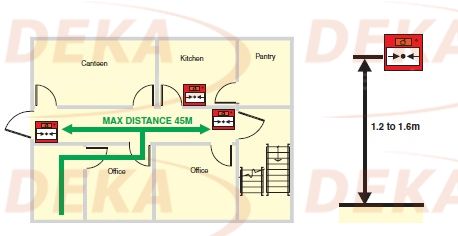 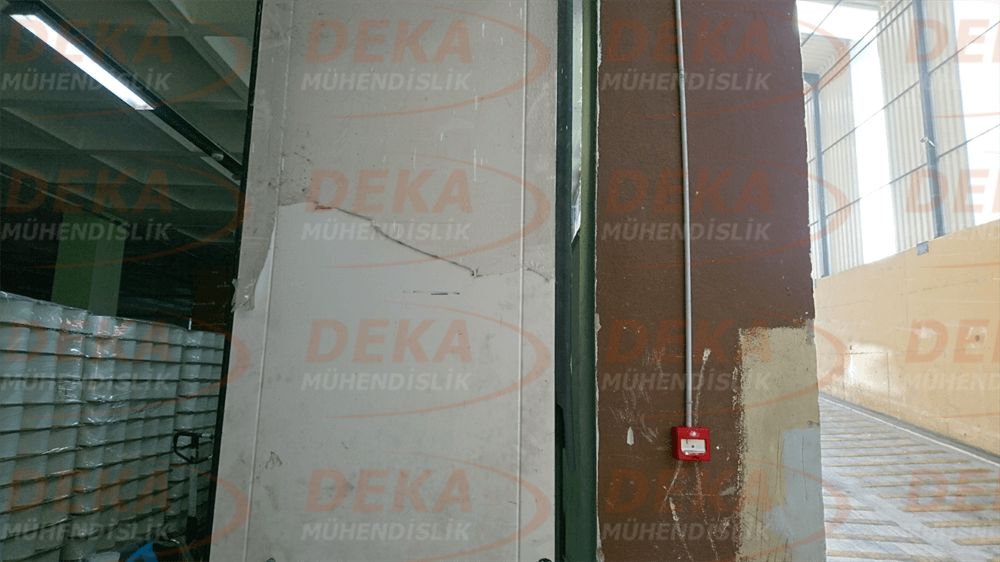 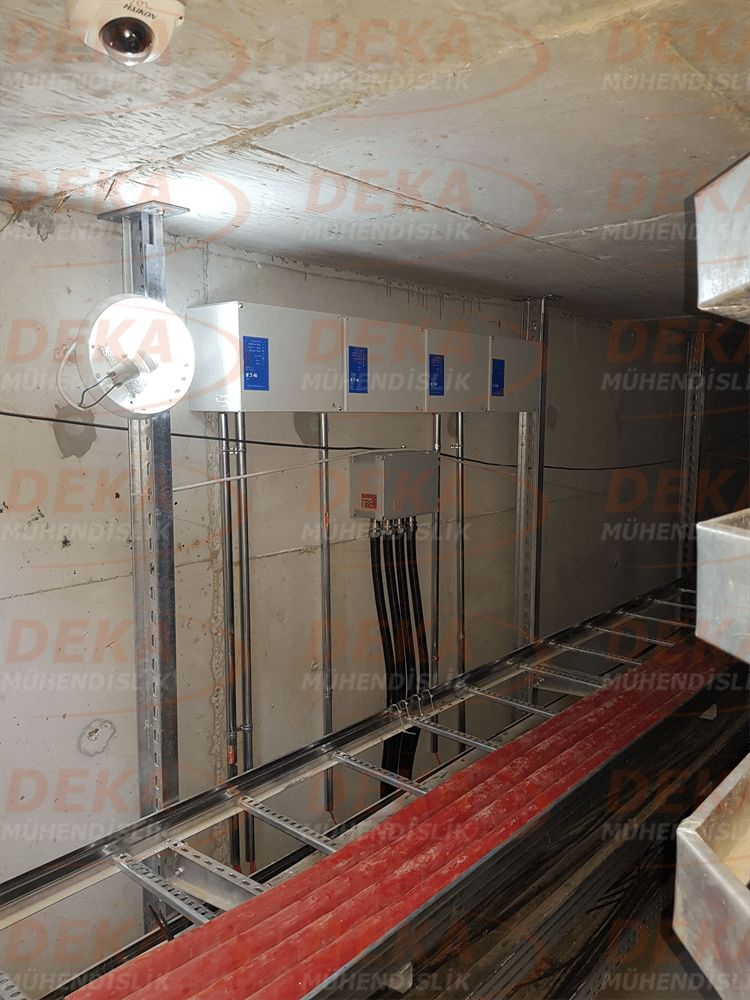 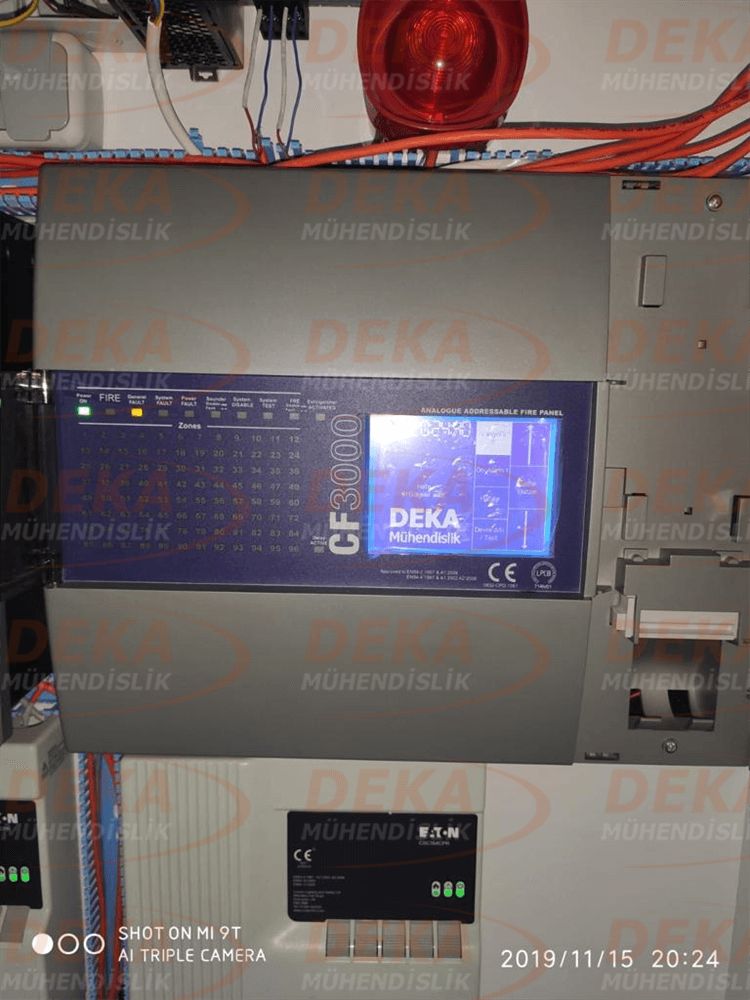 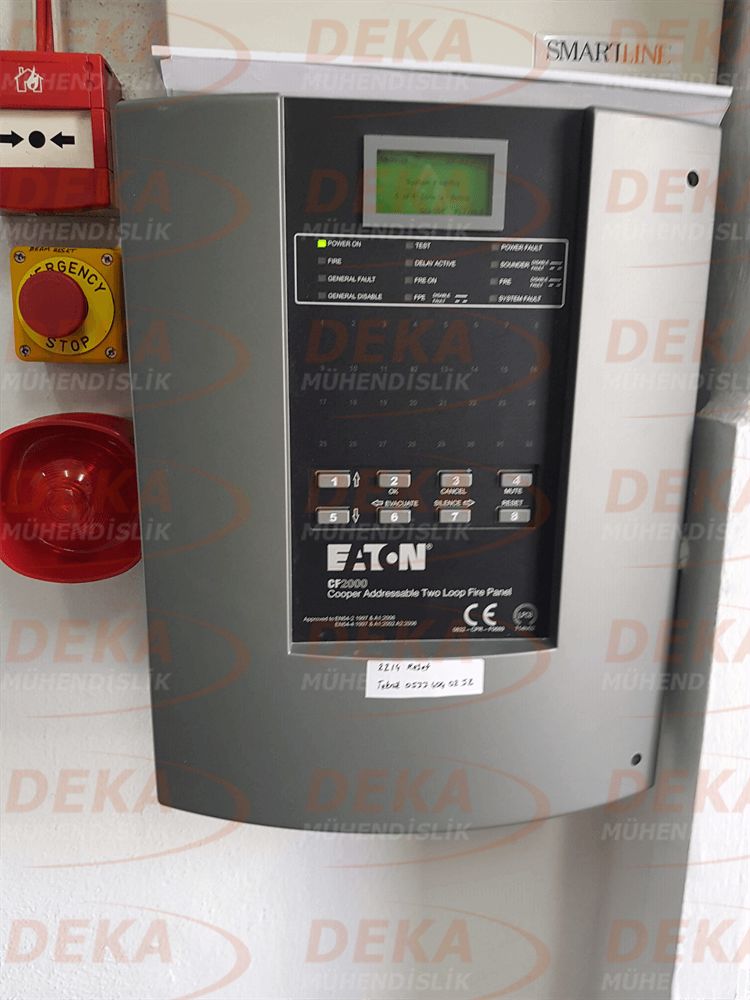 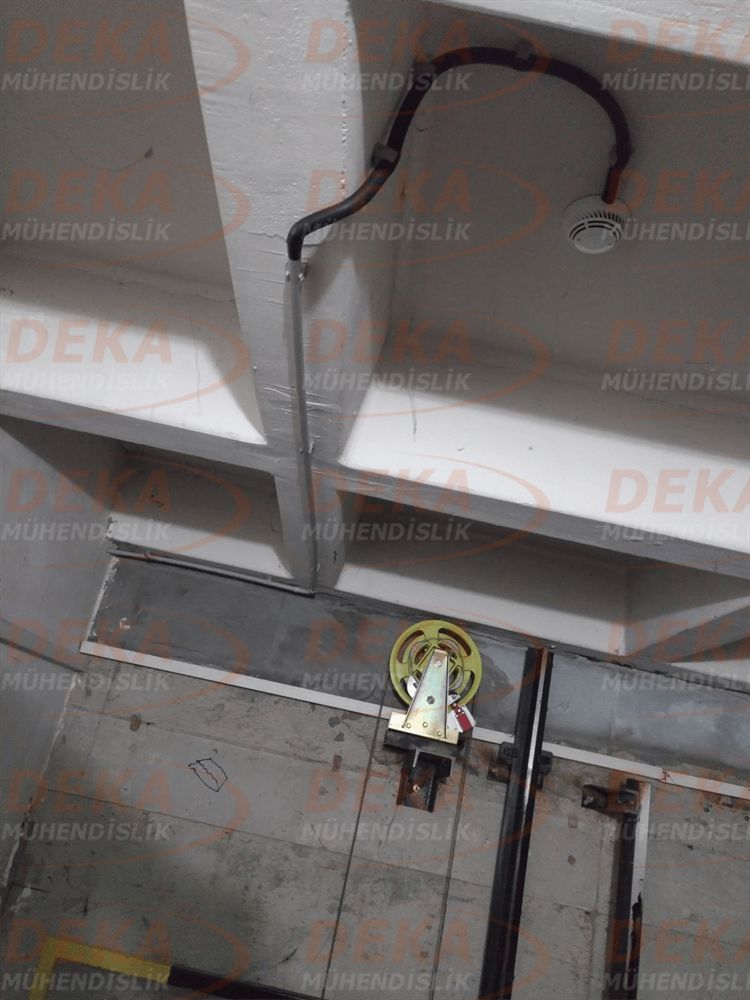 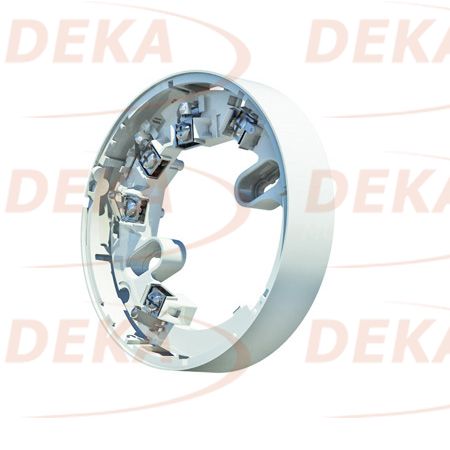 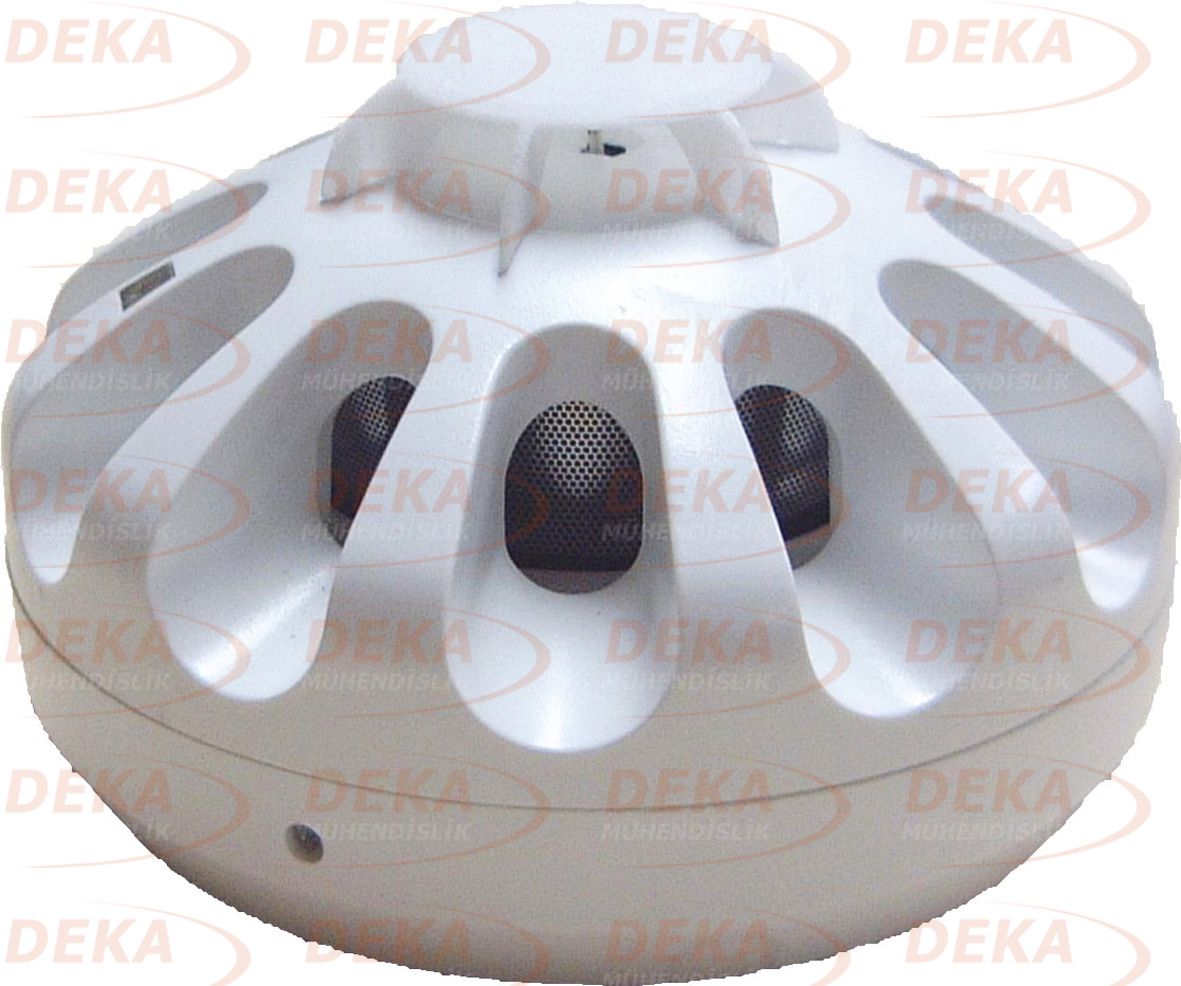 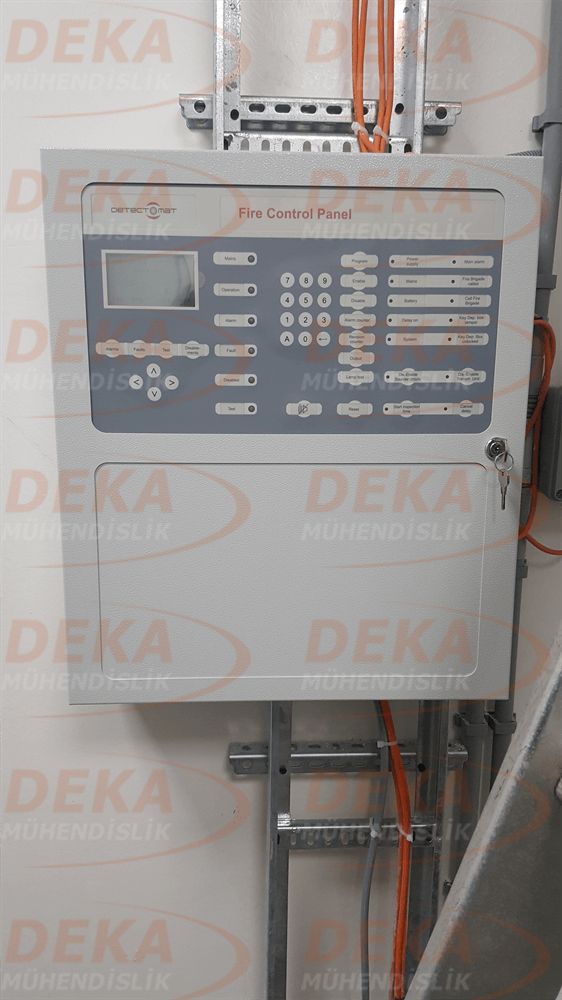 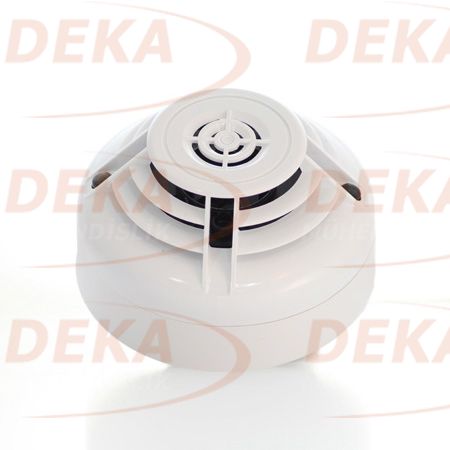 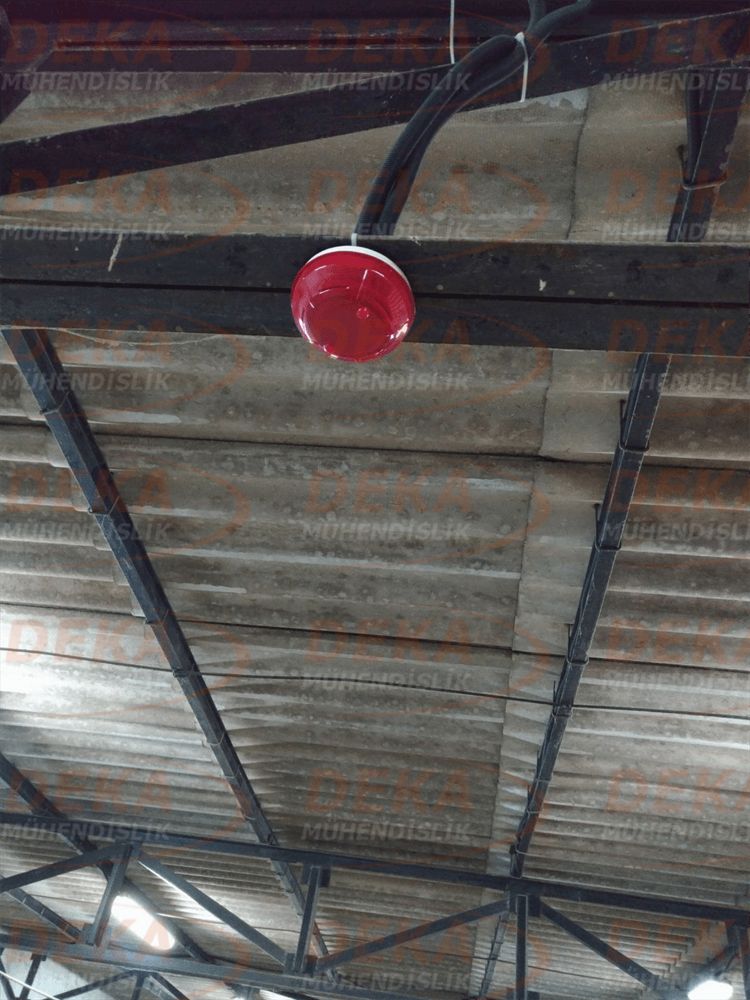 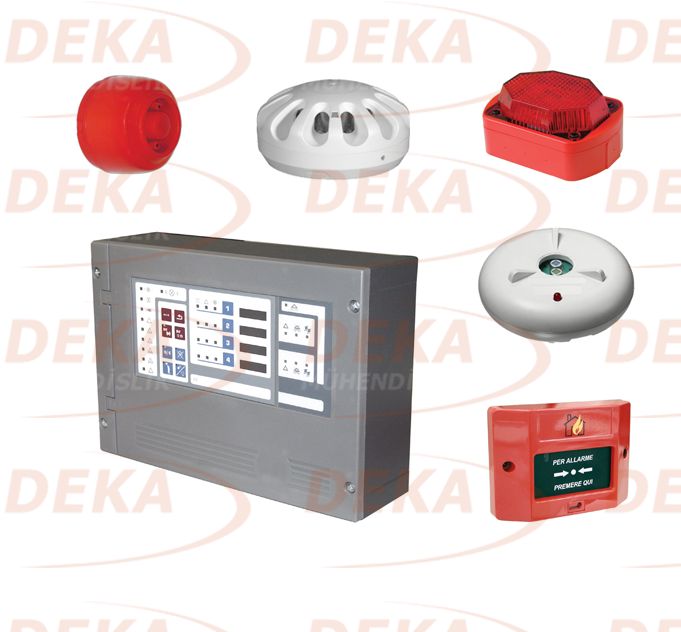 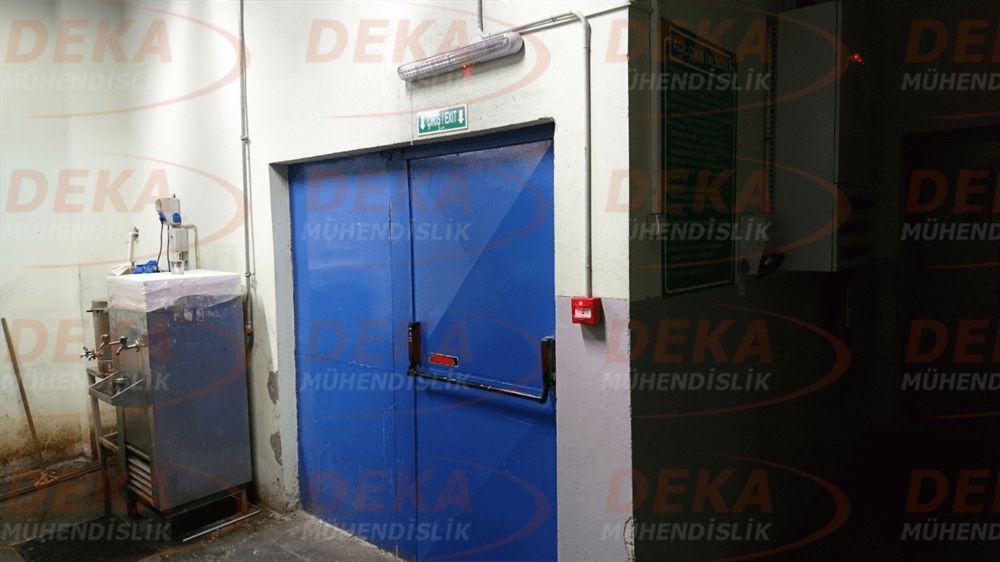 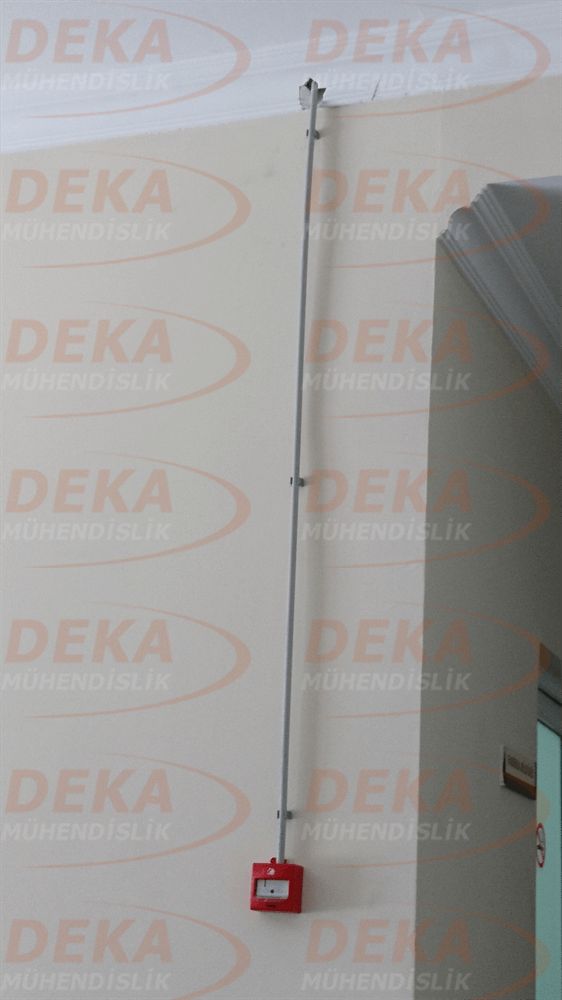 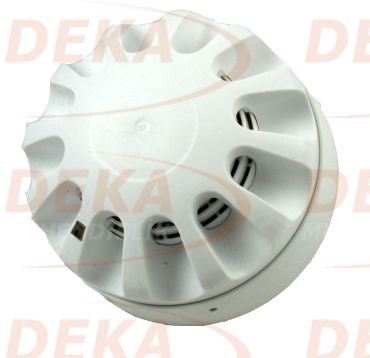 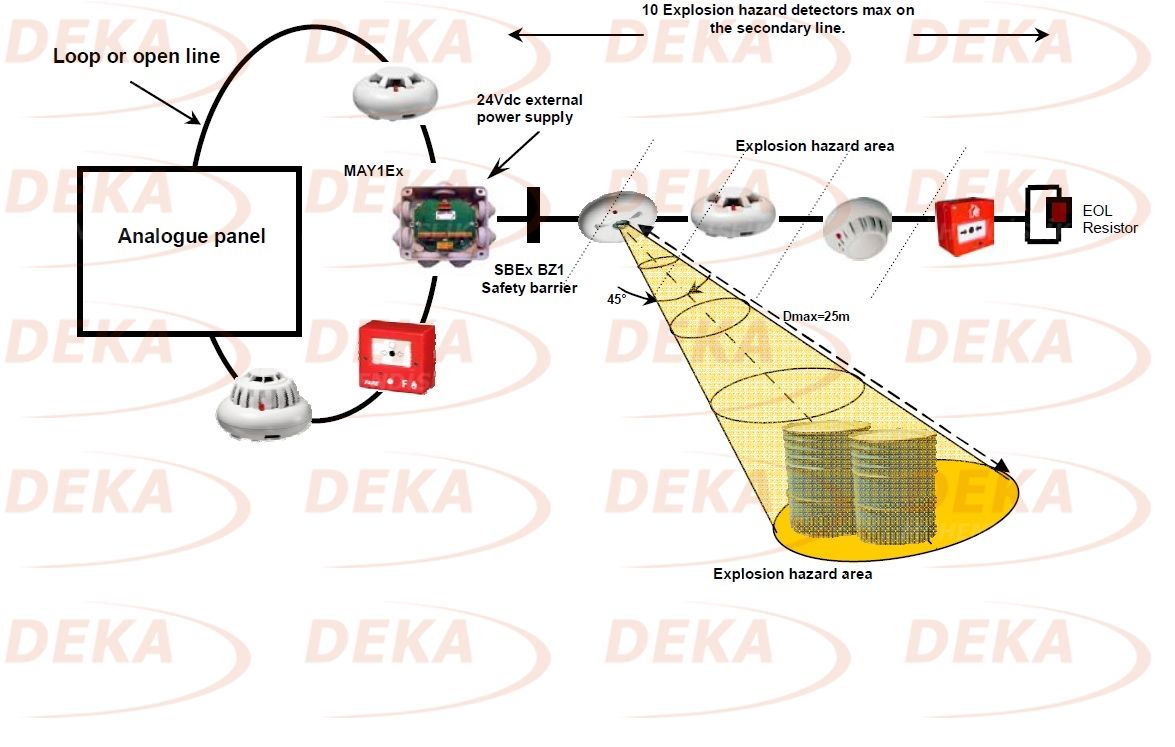 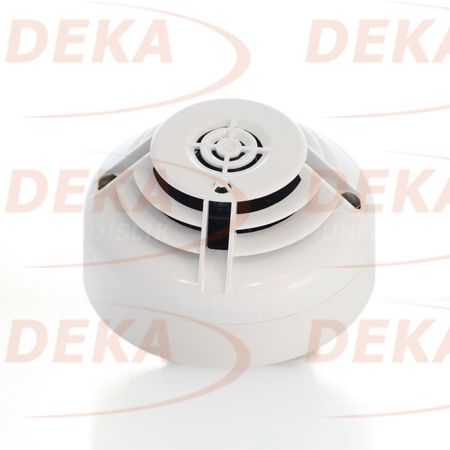 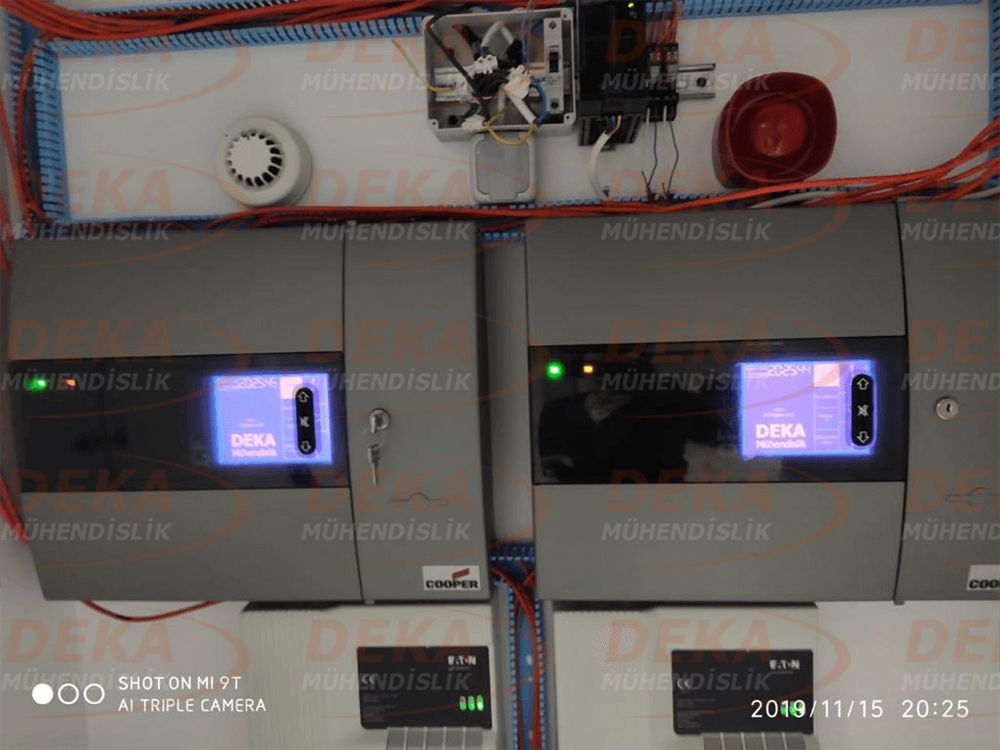 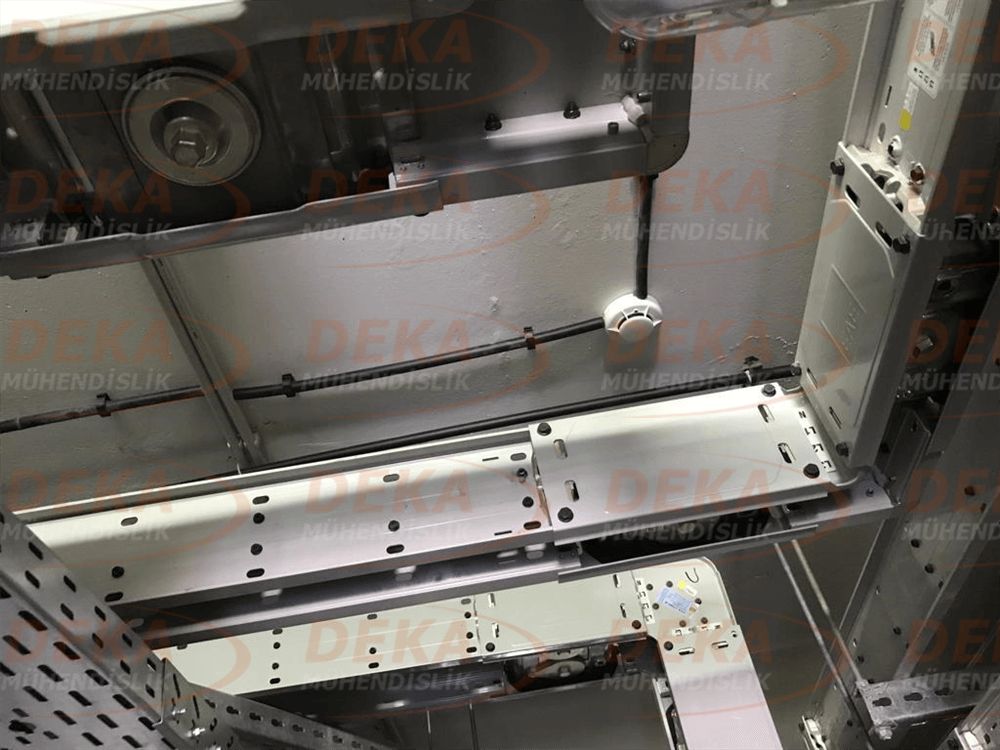 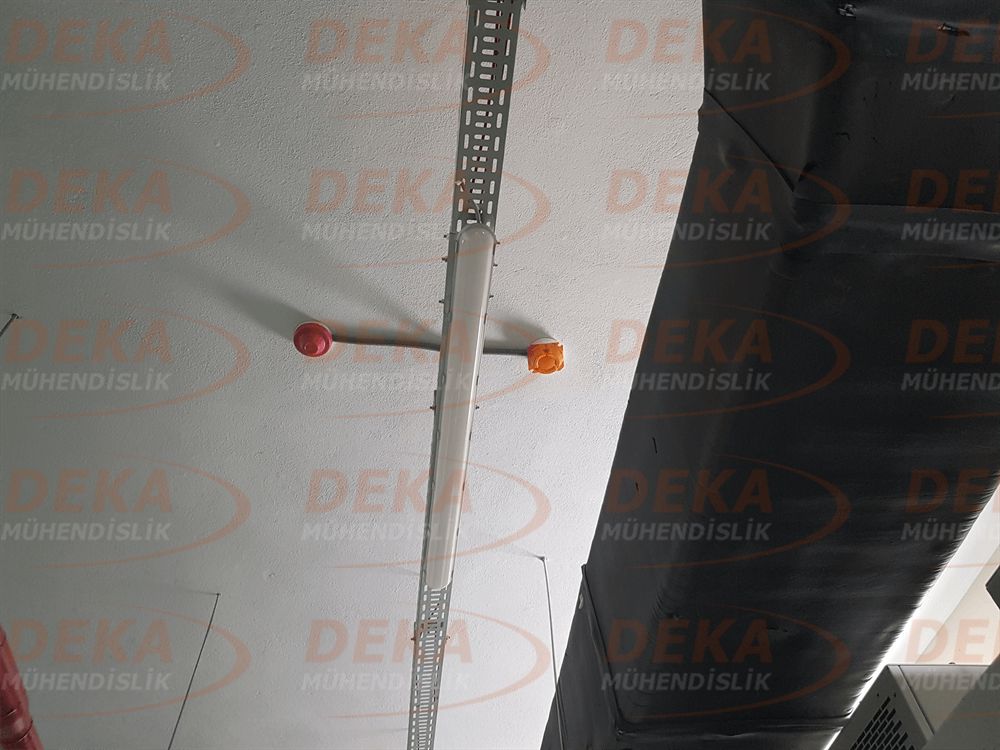 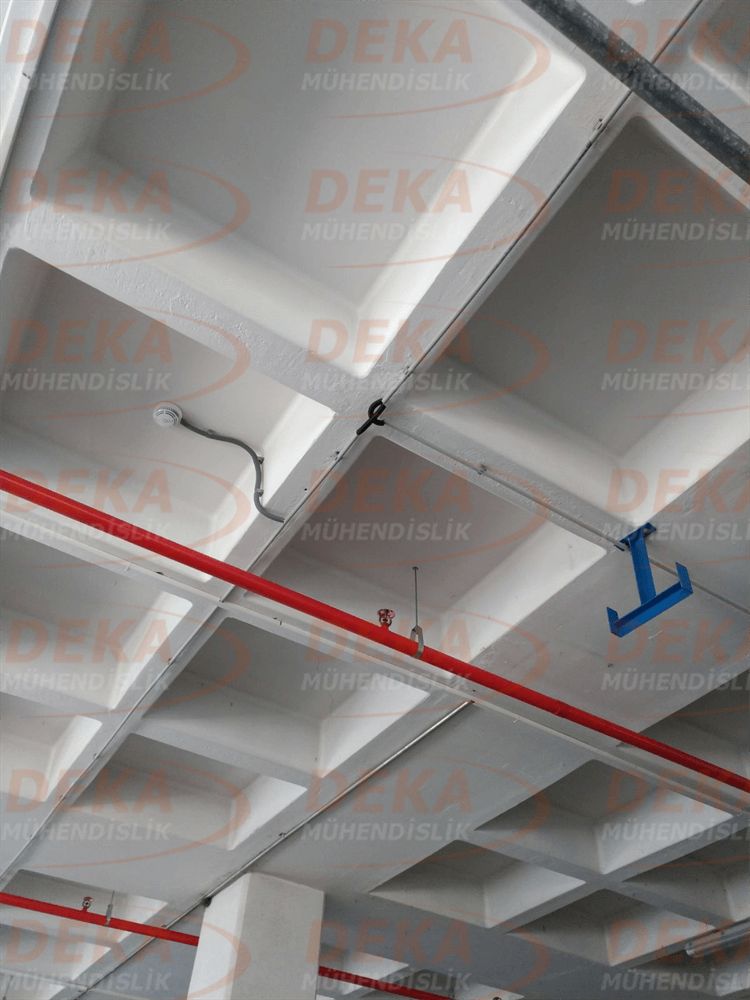 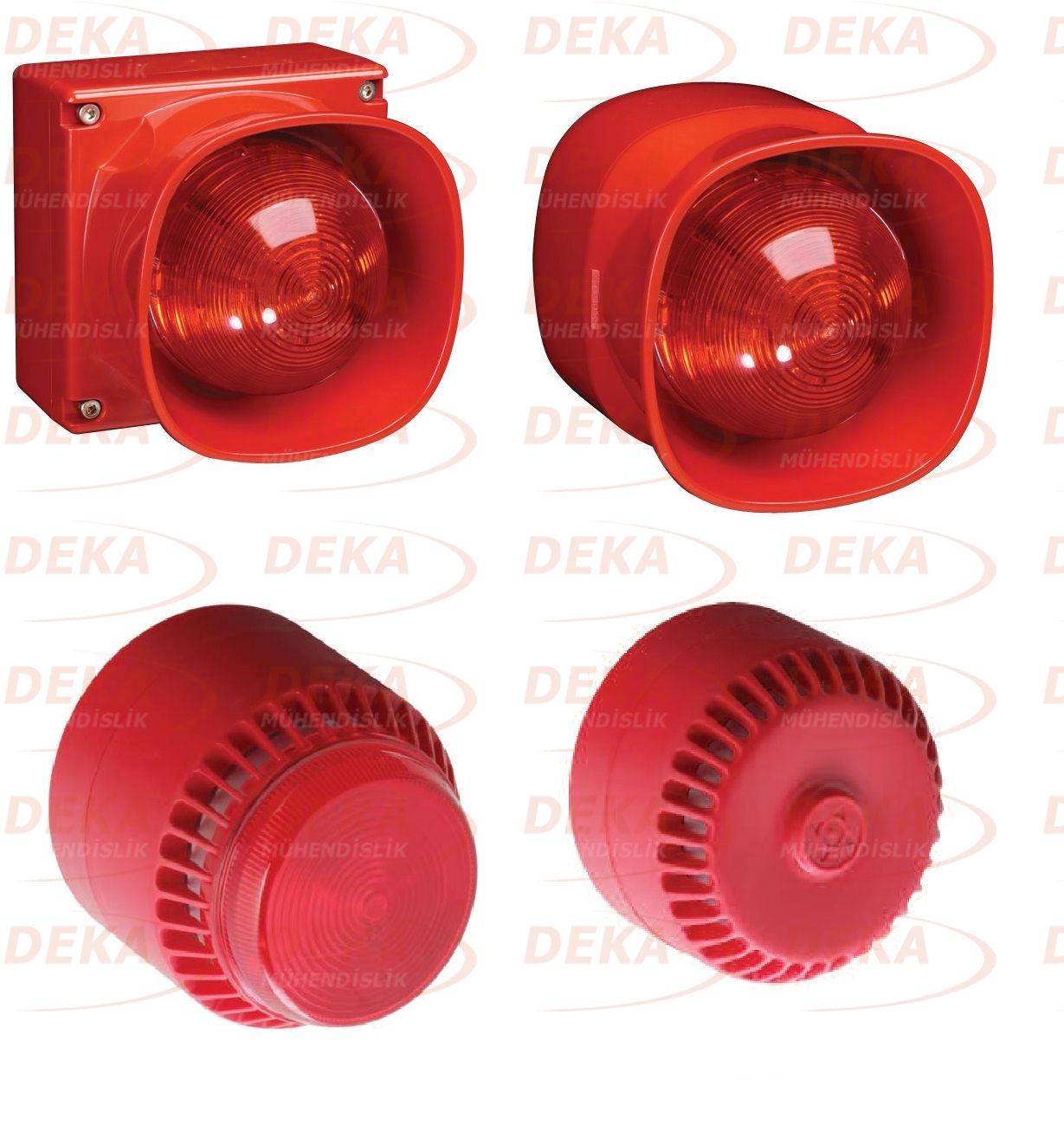 A maximum of 200 addresses can be connected in one loop of the panel. One loop length of up to 2,000m is supported with 2 core 1.5mm2 fire resistant cable. Address is given to each of detectors, buttosn and field control modules. No address is defined for short circuit isolators that will prevent short circuit situations on loop cables.

Devices in the loop (detectors, buttons, siren control modules) definitely do not affect each other. The operation of other devices is not affected by the malfunction or removal of one.

The fire alarm panel can work on its own or it can be connected to each other with the network system in large distributed systems thanks to its communication port. In this way, the system collapses completely when any malfunction occurs. In addition, the system can be monitored from more than one place at the same time and it is possible to control events such as general alarm and error.

The panel is fully microprocessor controlled and any errors in its internal or external hardware can be seen on the LCD screen. In the fire alarm panel, there are separate alarm lamps for each fire zone, illuminated alpha numeric indicator with character and local audible warning device. It is possible to see the current isolated or not isolated status, the current analog value, the logical region it is in, together with the name of the location assigned to the device at any time via the panel.

A mini-type thermal printer can be installed on the panel as required. The system clock is not erased even if all of the system’s energy, including the battery, is cut off. The clock of the system is important to determine when exactly the time of the alerts given is given.

Different work programs can be implemented at the panel during night and day hours. Pre-alarm function is available for early intervention in the presence of very low density smoke (fire response without sounding alarms).

The panel constantly checks each detector for the level of contamination and gives a “Service Required” warning when contamination is detected.

All cables leading to the detection and alarm panel, all lines used for communication to remote control and control centers; It is constantly kept under control against faults such as disconnection, short circuit and earth leakage.

The panel stores addresses, location names, cause / effect programs and the last 500 extraordinary events and stores this data. The program can be made in advance and easily transferred to the panel through the communication port of the computer. The panel program can be backed up on a computer floppy disk as a precaution against possible malfunctions on the panel. Changes to be made in the program can be made easily without having to rewrite the entire program.

The microprocessor of the fire alarm spanner evaluates and confirms the alarm signals from the detectors for the last time. It informs and warns the operator in the form of written, audible and light alarms depending on the programming made, then to the environment.

By encrypting the panel, unnecessary interventions can be prevented outside of the authorized personnel.

It can send signaling to the audio alarm output, fire station, remote fire fighting center, observation station on the panel. Repeater panels can be connected to addressed fire detection and warning panels.

The fire alarm system can perform the detection functions for at least 24 hours in the event of a main supply failure. At the end of this period, it is equipped with fully sealed, sealed, maintenance-free accumulators so as to perform all alarm, control and communication functions for at least 30 minutes. It is important that the panel is grounded independently of not more than 5 ohms.

A repeater panel is installed in the room where security guards are located or another suitable place to be able to control the fire at the facility outside working hours, working hours and holidays.

The repeater panel has all indicator and control buttons on the main fire alarm panel, and all alarm and fault conditions related to the system can be monitored and system controls can be performed.

The repeater panel has separate alarm lamps for each fire zone, minimally illuminated alpha numeric indicators and a local audible warning device. All regional fire lamps have location numbers indicating which fire zone they belong to.

Addressable Optical Smoke Detectors
Addressable optical smoke detector is microprocessor controlled. The detector is sensitive to smoke particles between 0,5 micron and 10 micron. It responds rapidly to smoke, which develops slowly, especially by smoking.

The detectors have a photoelectric smoke cell that operates on the light scattering principle. The addressable optical smoke detector sends the smoke levels it measures to the control panel as analog information.

Environmental influences such as heat, humidity and pollution should not interfere with the ability to detect. The detection chamber of the detector must be reached with a simple removal tool during maintenance or when it is necessary to clean. The dedector base should be removable and should be easily cleaned. The cell must be replaceable. Short circuit isolator model should be preferred.

Intelligent photoelectric smoke + temperature detectors are connected to one of the loops of the control panel with two wires. Detectors use the photoelectric principle to measure the smoke density. It sends data representing the level of analog smoke density to the panel via the control panel command. Electronic sensors are used to measure thermal conditions caused by fire, and via the control panel command they will send data representing the analog levels of such thermal measurements to the panel. In combined detectors, these two functions can be evaluated at the same time or put a feature on hold.
The LEDs flash in regular under normal conditions to show that the detectors are working and communication with the control panel. When an alarm condition is detected, both leds will be turned on continuously by the control panel. These leds can be programmed in 3 different colors as yellow, red and green. An output connection is provided inside the detector base to connect an alarm indicator with an external parallel warning lamp.
Operating voltage is 15-32V DC, normal current is 300 microamps (maximum), operating temperature is -30 ° C / + 70 ° C, maximum detection area is 100 m², and the relative humidity of the working environment is between 10% – 93%.

Addressable fire alarm button is microprocessor controlled. It works as a manual warning element in the system. There are models suitable for under surface mounting and surface mounting.

Addressable fire alarm buttons are operated by breaking the plastic film covered glass on them. When the glass is broken, a micro switch that normally rests on the glass must release and change position and remain in this state until a new glass is installed. It should not damage human hands when its glass is broken. In addition to the push and break type, push-set fire alarm buttons are also used.

The addressable fire alarm button should also be tested without breaking the glass by means of a test key.

Electronic addressable sound and light warning devices can be fed from the loop line. Warning devices with flasher and siren features that can be used separately or together can be used. In sounders, low level 87 dB, medium level 93 dB and high level 101 dB can give warnings at 3 different sound levels and these levels can be programmed by the panel for each siren.

The control module to be connected to the analog addressed fire alarm panel cycle is used to operate the audible alarm devices. It is microprocessor controlled. Outputs can be programmed to run continuously or intermittently.